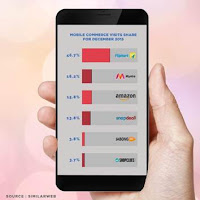 Flipkart continues its dominance of mobile commerce in India with 47% of share of visits among the major shopping apps in India, according to December 2015 data by analytics firm SimilarWeb. Myntra occupies the second position with over 16% share of visits. The combined traffic share of Flipkart and Myntra stands at an overwhelming 63%. Amazon stands at the third position with 15.86% followed by Snapdeal with 13.84%.

The Indian e-tail market is overwhelmingly mobile dominated with around 70% percent traffic coming from mobile devices. Desktop contributes to only around 30% of the total traffic, a share that has been declining rapidly.

On the other hand, PC shipments have seen a precipitous fall. According to IDC, world PC shipments have suffered a year-on-year decline of minus 10.6%. This is the largest decline in history for PC shipments. The Indian PC market is also declining rapidly with MAIT reporting a fall of over 10% in July 2015.

Note: The visit share has been computed by comparing visits among top shopping apps – Flipkart, Myntra, Amazon, Snapdeal, Jabong and Shopclues, as reported by SimilarWeb for December 2015.
ecommerce mobility