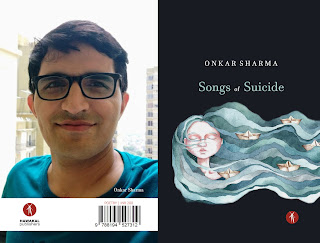 Onkar Sharma's debut collection of poems 'Songs of Suicide' at first glance may look intimidating and frightening. A deeper study and understanding helps readers discover rare thoughts and feelings woven in the fine thread of verse. The poem projects an image of the society, whose complex system is grinding many souls and forcing them to go down the suicidal path.
Of all the poems in the collection, I loved 'Panchtatva -the five elements' the most.  The poem has been structured to denote multiple stages of human psyche and conscience. It has been notably divided into five sections that symbolize the five elements, which make this life and the mother earth. The word 'panchatatva' comes from Sanskrit, where "panch" stands for five and "tatva" means elements. As per Hinduism or Sanatan belief, everything on Earth is composed of five basic elements or the "panchamahabhutas". These elements are:  Akash (Sky or Space), Vayu (Air), Jal (Water), Agni (Fire) and Prithvi (Earth). The subsections of the poem are also titles as per these elements.  Without one element, the life will not look like the way we see it.
The poem deals with the tragic subject of suicide and brings to the fore three typical situations in which humans in the modern world commit suicide. The opening lines set the tone for the book and leave readers aghast:
he walked by the bridge-rail and mumbled.
he sobbed on his past mistakes and tumbled.
yet he held himself and stopped in the centre
to overlook at the eerie waves that did enter
in broad daylight through the discarded waste
and mired the abutments with stinking paste.
- Songs of Suicide, by Onkar Sharma (Buy Here)
Every line of this long poem comes as a reminder to those sitting in power positions to bring about changes that can save hundreds of people from hanging themselves. As per the WHO, every year 800,000 people kill themselves every year globally. As per the poet, the collection 'Songs of Suicide' aims to save those disturbed lives and bring them back into the social cycle.
Onkar Sharma, who is the editor of LiteraryYard.com, has skillfully crafted the collection and hence applause for treating the subject with master precision.
#TweetServe