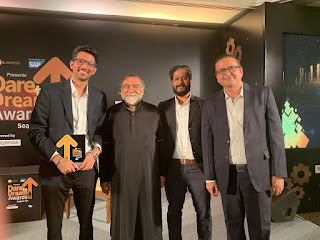 CleanMax Solar was awarded for its contribution towards facilitating the adoption of rooftop solar energy, with an operating on-site capacity of 190 MW in India. The award recognises the company’s role in providing economically viable solar solutions for corporates by pioneering  the ‘Energy-Sale’ model to become India’s top rooftop installer in 2018 (Source: Mercom India 2019 Report).

As a testament to their success, the Energy Sale model pioneered by CleanMax has been replicated by the Government across industries, for speedy adoption of solar energy. The MNRE renamed the same model as the RESCO model which made adoption easier for Government buildings and establishments. The vast majority of central and state government rooftop solar tenders in India are under the RESCO model.

Speaking about the win, XXXX, CleanMax Solar said, “We are honoured to have been recognised for our efforts in promoting renewable energy, which is the need of the hour. In a country like India, which is blessed with abundant sunlight for over 300 days of the year, the potential for rooftop solar is huge. Such wins inspire us to do more, and continue to work zealously to increase India’s installed capacity of renewable energy. With the right policy impetus, we are certain that India’s rooftop solar energy will account for a substantial share of the overall renewable energy pie, while addressing the challenges of implementing solar energy in space strapped metro cities.”

CleanMax Solar has a network of open access solar farms with 330 MW operating capacity installed in Karnataka, Tamil Nadu and recently expanded to Haryana with a plan to set up a 150 MW Solar farm. The company is also working to expand its solar farm business to Maharashtra, Andhra Pradesh, Gujarat and Uttar Pradesh. Over the years, CleanMax Solar’s operating capacity has grown from 27 MW in 2015-16 to more than 520+ MW in 2018-19.

Among the other feathers in its cap, CleanMax Solar has been recognized as the first Indian company to win the prestigious Transformational Business Award 2018 by Financial Times (FT) and International Finance Corporation (IFC) inthe Transformational Infrastructure’ category. The company has also been recognized by the Ministry of New Renewable Energy (Government of India) and conferred with the National Excellence Awards for the Rooftop Solar Developer and Rooftop Solar EPC Player in 2016.
cleanmax