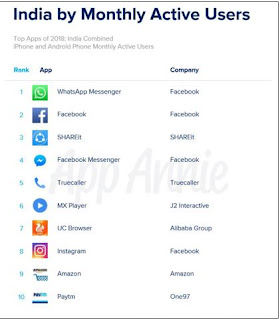 In a report launched by App Annie, the global provider for mobile data and analytics, SHAREit has emerged as the most downloaded tool app in India. It was also ranked as the application with the third most active monthly user base in India, next only to WhatsApp and Facebook.

SHAREit currently has more than 400 Mn users in India who have installed the application. Out of these over 200 Mn are our monthly active users.

The report also mentions SHAREit amongst the top 5 applications downloaded in India across categories. This huge feat was achieved by SHAREit by deeply understanding the Indian internet user’s behavior as well as their demands. Basis their findings and with the digital revolution taking over, SHAREit started its journey into content by partnering with local Indian content providers.

The application which started as a content sharing application, is now amongst the leading content discovery, consumption, and sharing platforms in the country. Via strategic partnerships with local Indian content provider platforms, SHAREit now streams local digital content such as short videos, movies and music etc. for its Indian users which is available in 9 local Indian languages such as Hindi, Tamil, Telugu, Kannada, Punjabi, Malayalam, etc. With a wide user base especially in tier II and tier III cities, SHAREit has also helped their content partners reach wider audience, especially those unreachable by big players in advertising industry.

Talking about the achievement, Mr. Karam Malhotra, CEO, SHAREit India, said, “We are overwhelmed by the response we have received from India. We find ourselves with a new found sense of responsibility to continuously entertain our loyal users and connect them to them the best of content, gaming and app discovery in 2019.”

“SHAREit regards technology and localization as its most important factor. In the past year, we have worked towards strengthening our team in India with experts from each industry in our 3 markets Delhi, Bangalore and Mumbai. Beyond the metros, SHAREit also has teams who are working hard to expand the applications’ reach and serve our users in tier II and tier III cities. We are on a journey to ensure digital entertainment of all types could be equally accessible by everyone, by becoming the one-stop service platform allowing users to browse, download, and transfer content with ease.” He further added.

To achieve this goal, Karam also said that, “SHAREit welcomes everyone to join hands as our partner, together we could engage SHAREit’s huge user base and wide reach in India. Together, SHAREit and its partners will revolutionize how users discover, consume and share content in India.”