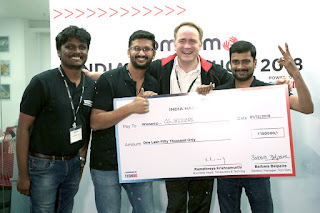 In all the event received 14000 developer registrations. For the qualifier round there were 2800 entries and five teams which made which made it to the grand finale were assigned mentors from TomTom to provide guidance. The finalists presented their idea and demonstrated their app to the final jury consisting of TomTom’s senior global leaders on 1 Dec at the TomTom Pune office. Team ‘CS_Sizzlers’ which included Ramkumar R.N, Suresh A.S, and Venkatesh Mallu won the grand finale with their viable app on smart commuting. The first runners up Pragya Shukla and Akshit Pradhan called Team ‘Apps’ created a smart home & area guide application. The augmented reality travelogue built by members of team ‘DroidBots’ Sabarinath.S, Shivom Thakkar and Saif Lakhani won the second runners up position.

“Along with enabling smart cities with the latest traffic and navigation information, TomTom also empowers developers with Maps APIs,” said Barbara Belpaire, General Manager, India, TomTom.  “The hackathon stems from a combination of the two and establishes us as a leading location technology company with the technical community in India. More importantly, collaborating with students and senior technologists sparks innovative solutions for apparent societal challenges.”