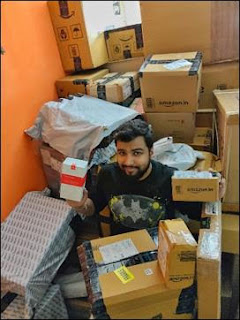 Amazon.in, in association with OnePlus, a smartphone maker announced its unique ‘OnePlus Lucky Star’ campaign last week to celebrate the fourth anniversary of their partnership. Shashank Shekhar, a 24 year old resident of Delhi has been declared the ‘OnePlus Lucky Star’ and is now eligible for 600 exclusive gifts ranging from electronic appliances to fashion to home decor. The 600 gifts were delivered personally by Vikas Agarwal, General Manager, OnePlus India to his doorstep.

The winner received over 600 exciting gifts ranging from INR 100 to INR 80,000 across 35+ categories from a wide selection available on Amazon.in. These included items like laptop, gaming console, large appliances, furniture, musical instruments, sports equipment, kitchen & home items and even stationery.

Manish Tiwary, Vice President – Category Management, Amazon India, said, “We received an overwhelming 3 times growth in demand for OnePlus 6T during the anniversary offer. We are happy to see our ‘OnePlus Lucky Star’ absolutely thrilled on receiving the 600 gifts from Amazon.in. These gifts are specially curated from across categories like appliances, fashion and home décor among others available on Amazon.in. We look forward to an even more exciting journey ahead, through our partnership with OnePlus.”

Speaking at the occasion, Vikas Agarwal, General Manager, OnePlus India, said, “Our partnership with Amazon.in began with customer obsession. As we mark four years of that partnership, we are very excited to be able to give back in a small way to the community that has made all of this possible. We congratulate Shashank on this win and personally, it’s been a very unique and exciting experience delivering 600 gifts today!”

Since the anniversary celebration offer and ‘OnePlus Lucky Star’ campaign has been announced, Amazon.in has seen a boost in traffic seeing a 3X growth in demand for the OnePlus 6T on the platform. The unique campaign has been co-created by Amazon.in and OnePlus to give back to their users who have been a vital part of four years of the long-standing partnership of the two companies.  The ‘OnePlus Lucky Star’ winner today has received over 600 gifts from the widest ecosystem that Amazon.in has developed over the years for an unparalleled shopping experience.
mobility oneplus 6t