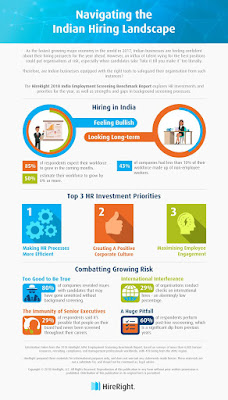 Half (50%) of companies across India are expecting their workforce to grow by an incredible 6% or more this year, according to the inaugural India Employment Screening Benchmark Report from HireRight, a leading provider of global background checks.

The India spotlight is based on HireRight’s annual Employment Screening Benchmark Report, the largest, most comprehensive survey of its kind in the industry. Nearly 6,000 human resource professionals were surveyed globally this year.

It revealed that overall, an incredible 85% of organisations in India were looking to bolster their teams with increased hiring – a sentiment considerably more bullish than the wider APAC region, at 77%. Interestingly, the survey also revealed a significant decrease in organisational dependency on contingent workers compared to last year’s findings – almost half (43%) of companies had less than 10% of their workforce made up of non-employees. This suggests that planned recruitment drives in 2018 may focus on permanent positions.

Yet, despite the confident hiring expectations, improving employee retention seems to be the key theme for organisations in 2018. Almost half (47%) of businesses surveyed indicated they were investing in strategies to keep their staff – this is more than double (22%) from 2017.

Indeed, India saw an increase in planned HR initiatives across all areas. Developing effective employee training programs saw the biggest jump with 53% of organisations planning to invest – up from 24% in 2017. Overall, increasing the efficiency of HR processes topped the list of most important initiatives (57%), followed by creating a positive corporate culture (54%), and maximising employee engagement (53%).

However, with aggressive growth comes the potential for increased risk. According to the 2018 Report, 80% of India employers have uncovered issues with job candidates through background screening that would have otherwise gone unnoticed by their organisation. This represents an increase of 3% points from last year. The most common discrepancies included previous employment records (80%), educational credentials (56%), and criminal histories (15%).

“The results of the report are consistent with industry calls to shift focus away from merely increasing labour participation rates to increasing meaningful employment. The growing intent by organisations to invest in their employee and candidate experiences all reflect the desire to not just create more jobs, but to enhance the quality of work and, in a market where jobs are plentiful, give employees a reason to stay,” said Steve Girdler, Managing Director of EMEA and APAC at HireRight.

“With aggressive growth ambitions, however, it appears that gaps are developing, exposing organisations to greater risk. These are apparent in the form of lapses in screening processes for senior-level candidates and international hires. Reducing time-to-hire at the expense of organisational security and safety is unsustainable, and companies need to recognise that these attributes are an integral part of creating a quality work environment.”

The growing gap in screening standards for executive-level candidates.
While 84% of businesses conduct some form of background screening on executive-level candidates, 40% of organisations admitted that their organisation had different standards for screening each candidate – up from only 26% last year.
A further third (33%) said senior-level candidates had to go through fewer tests and interviews as compared to entry-level hires – up from 26% in 2017.
More than half (52%) also knew of issues that had arisen as a result of senior executives not being screened during a merger, while 48% of respondents knew of people who hired high-profile positions based simply on ‘gut instinct’.

A lack of international screening efforts.
Less than a third (29%) of organisations in India conduct checks on international hires – down from 37% the year before, and considerably lower than the 41% APAC average.
Employees HireRight Hiring HR