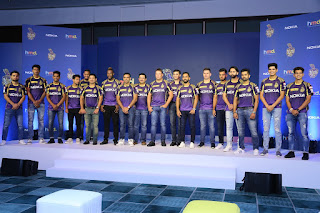 HMD Global, the home of Nokia phones, announced its association with the Kolkata Knight Riders (KKR) as its principal sponsor. As a part of the association, HMD Global and KKR unveiled the new official team jersey for the 2018 season sporting the Nokia logo on the front of the jersey. The jersey was unveiled by Ajey Mehta, VP India, HMD Global and Venky Mysore, CEO, KKR on stage along with Dinesh Karthik, Robin Uthappa, Kuldeep Yadav, Andre Russell, Sunil Narine and Jacques Kallis among others.

HMD Global will also be engaging fans through a campaign as a part of which it will host contests on its @nokiamobilesocial media platforms including Twitter, Instagram and Facebook. These campaigns will make extensive use of digital and mobile channels to enable cricket enthusiasts and KKR fans to engage with the team.

Announcing the association, Ajey Mehta, Vice President and Country Head, India, HMD Global said,“Nokia brand and KKR have a history together and we are delighted to reunite the two again. KKR is amongst the most successful IPL franchisees and teams on the IPL circuit and like Nokia brand enjoys a pan India appeal. This association embodies the unique relationship that Nokia and KKR enjoy with the youth of India. It, not just reinforces our love for the IPL, but also highlights our commitment to uniting young fans everywhere with their unbridled passion for the game.”

Shahrukh Khan, Co-Owner of Kolkata Knight Riders said,“Nokia as a brand has always been close to my heart. We are excited to partner with HMD Global as they script the next chapter of Nokia phones. Nokia is amongst the most loved brands in India. Through our association, we look to unite fans of Nokia and KKR with the common passion for cricket.I look forward to more excitement in the days ahead.”

IPL 2018 gets underway from April 7 and the first KKR match is scheduled on April 8 with the Royal Challengers Bangalore. Dinesh Karthik will be captaining KKR.
hmd Kolkata Knight Riders Nokia