Global Venture Capital Investment in Fintech Industry Set Record in 2017, Driven by Surge in India, US and UK, Accenture 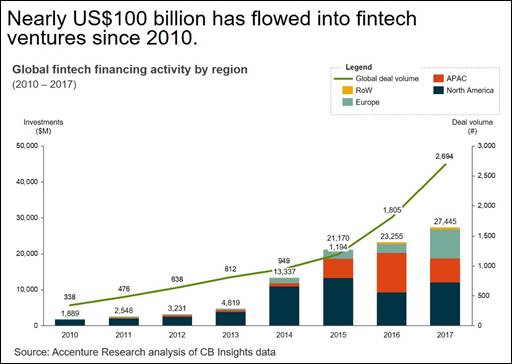 Global investment in financial technology (fintech) ventures reached another all-time high in 2017, buoyed by a surge in funding for startups in the United States, United Kingdom and India, according to Accenture (NYSE:ACN) analysis of data from CB Insights, a global venture-finance data and analytics firm.

Fintech financing rose 18 percent in 2017, to US$27.4 billion, with the value of deals in the U.S. jumping 31 percent, to $11.3 billion. Deal values almost quadrupled in the U.K., to US$3.4 billion, and soared nearly fivefold in India, to US$2.4 billion. The number of fintech deals also rose sharply, from just over 1,800 in 2016 to nearly 2,700 in 2017, underscoring continued appetite from investors scouring the globe for innovation in insurance, banking and capital markets startups.

“Much of the growth, particularly in the U.S. and UK, has been driven by big new investment flows from China, Russia, the Middle East and other emerging economies,” said Julian Skan, senior managing director in Accenture’s Financial Services practice.  “In addition, we saw more and more B2B fintech models proving out at the banks, coupled with larger and later-stage investments as the fintech world scales up. Also fueling growth was the rapid rise of ‘insurtech’ ventures where traditional carriers see new opportunities. India’s boom was driven by strong demand for cashless services following the country’s ‘demonetization’ events.”

“This volume of investment reflects the soaring demand within financial services for new digital innovations, as these technologies prove their value and applicability in the market,” added Richard Lumb, group chief executive—Financial Services at Accenture. “That will continue to position fintechs for a vital role in helping reshape the financial services landscape. For markets like the UK, where slower economic growth and industry uncertainties due to Brexit have been an issue, it is an encouraging sign.”

Fintech startups operating in lending and payments took the bulk of U.S. investments, mirroring a global trend and accounting for 60 percent of the $11.3 billion in the country, the data showed.

India, US, UK drove global growth
Kabbage Inc, a U.S. online lender for small businesses, alone raised US$900 million in three separate rounds in 2017. Online lender Social Finance Inc, also known as SoFi, raised US$500 million in February, and LendingPoint raised US$500 million from a credit transaction in September. As startups grow and their businesses mature, funding rounds have increased in size, while some companies have opted to use credit facilities to speed up their expansion.

In the U.K., digital insurance distributor BGL Group raised US$900 million, pushing overall fintech investments in the country to an all-time high of US$3.4 billion. Payments venture TransferWise had the second-largest fundraising in the U.K., raising US$280 million.

India’s digital payments startup Paytm received US$1.4 billion in venture capital, helping drive fintech fundraising activity in the country to nearly five times the 2016 levels. The number of fintech deals in India increased 65 percent over 2016. The increased activity was largely spurred by the central bank’s “demonetization” initiative geared to combat corruption by banning high-value bank notes, which prompted millions of Indians to shift to mobile payments and other cashless service providers like Paytm.

More deals in China, fewer megadeals
Mega fintech deals that had catapulted China to the top destination in the world for venture capital money in 2016 fell in 2017, as investors pulled back after pouring billions of dollars into giant-sized transactions. Fintech funding in the country declined 72 percent in 2017, to US$2.8 billion, from a record US$10 billion in 2016, when several companies – including Ant Financial and wealth management platform Lufax – had multi-billion-dollar financing rounds. The average deal size in China in 2017 was US$19 million, down from US$186 million in 2016, though the country still had large transactions, such as the US$440 million that real estate broker Homelink raised in April and the US$290 million that online finance firm Tuandai raised in June. 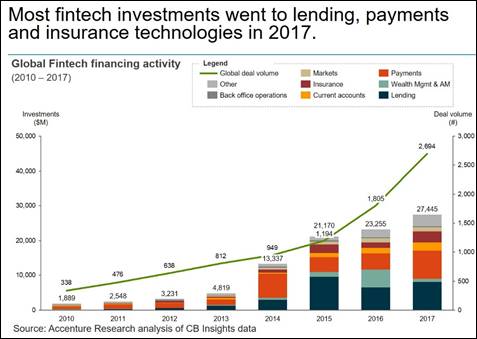