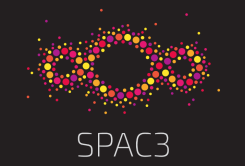 Michelangelo Pistoletto’s Third Paradise, which travelled to Space with the ASI Mission VITA on the 28th of July, has returned to the Earth with the ESA astronaut Paolo Nespoli on Thursday the 14th of December.

The reformulation of the symbol of the infinity by the great Italian artist was chosen by ASI (Italian Space Agency) and ESA (European Space Agency) as the main element of the logo of the mission VITA in collaboration with RAM radioartemobile and Cittadellarte – Pistoletto Foundation.

The upcoming return of Paolo Nespoli represents a moment of review for SPAC3, the artistic and cultural project developed by ESA together with RAM radioartemobile in cooperation with ASI and Cittadellarte-Fondazione Pistoletto. The result is positive: the thousands of users, from all the countries of the world, who decided to use the app and social networks as a tool to launch their  own sustainability message on issues that promote the 2030 United Nations Development Agenda Sustainable, through six major areas of interest: the protection of the Earth, zero hunger and food safe for all, water and underwater world, health and wellbeing, react to climate change, transformation of society with sustainable production and consumption.

Several countries showed greater sensitivity towards this project; Italy was the first, with the largest number of downloads, followed by India, China and Spain. Especially Indian users were particularly sensitive to the issues of sustainability: a sensitivity that is visible not only in the number of downloads in the country but in the number of appeals through the app and they went to compose the incredible social collective artwork viewable on: spac3.space

Through the touch function moving particles can be called up and unveil the images that each participant posted on its social networks.  In total there were over 5,000 people who have decided to join this project.

“SPAC3 was born to unify humanity in a great project of balance and harmony, a great work of art that involves all humanity in connection with the spatial operation – said Michelangelo Pistoletto – with the return of Paolo Nespoli, the life of SPAC3 is far from having exhausted itself: we take this planetary work around the world as a symbol of collective sensibility towards sustainability
industry