Twitter Recorded Over 4,00,000 Conversations As The Nation Responded To The Union Cabinet Reshuffle 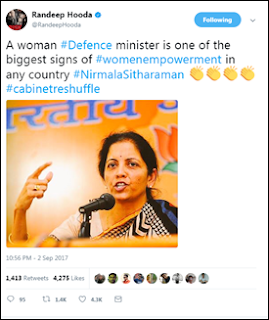 Twitter is the best place to know what’s happening in the world real time and participate in discussions around it. For India, Twitter has emerged as a critical platform for citizen engagement and public discourse. Twitter recorded over 4,00,000 conversations as nine new ministers yesterday took oath in fresh cabinet reshuffle in the Narendra Modi government - the third cabinet since he assumed responsibility as Prime Minister.

Indians from across the world turned to Twitter to participate in conversations on the cabinet rejig. Top hashtags used to share congratulatory wishes, reactions and opinions included #cabinetreshuffle, #TeamModi, #Modi2019Cabinet and #Ministry4NewIndia.

Mahima Kaul (@misskaul), Head- Public, Policy and Government, Twitter India said, “Twitter is the best place for people to discover  what’s happening around the world and the Indian government’s comprehensive utilization of the platform has been a great example for citizen engagement. It is heartening to see citizens participating enthusiastically on the appointment of new ministers to the Union Cabinet, encouraging more participation, and transparency in the system.”
social media Twitter Union Cabinet Reshuffle