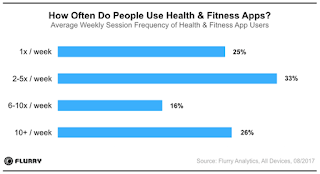 Flurry from Oath, today announced the current trends and opportunities for health & fitness app developers globally. As smartphone users have diversified their app usage, health & fitness apps have become a vital tool to make their lives healthier. In the last three years, health & fitness apps usage grew by over 330%. Users are continuously tracking workouts, signing up for classes, and keeping in touch with their general health.

Health and Fitness app segment is seeing huge growth in India as well, as per a “State of App nation” report revealed by Flurry this year. As per the report, Health & Fitness apps in India see high hourly engagement throughout the day (up 27% locally), as users turn to their mobile and wearable devices to track their fitness goals and progress.

Users are Highly Committed to Their Fitness Apps

Over 75% of active users open their health & fitness app at least two times a week. Also, there is a remarkably high percentage of Fitness App Addicts: more than 25% of users access their fitness apps more than 10 times a week. As a result, this frequency of usage drives up overall category engagement. For app developers, this presents an attractive opportunity to capitalize on users’ frequent engagement and boost monetization.


Year-Over-Year Growth is Slowing Down