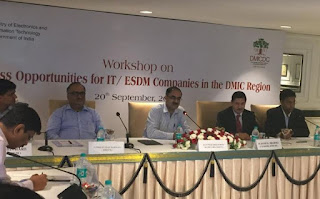 IT and Electronics sector in India is poised for massive growth and investments, and greenfield cities coming up under projects such as the Delhi Mumbai Industrial Corridor (DMIC) must position themselves as R&D hubs and “sandbox” locations for up-and-coming technologies such as IoT, Mr. Ajay Prakash Sawhney, Secretary, Ministry of Electronics and IT (MeitY) has said.

Speaking at a workshop on business opportunities in the DMIC project for IT/Electronics System Design and Manufacturing (ESDM) sector on Wednesday, he said that while the proposed industrial smart cities are providing ample space for existing technologies, they need to identify the ones with massive future potential and bring anchor clients for them, while simultaneously focusing on skill development to ensure manpower for these industries.

“Unlike congested urban spaces, in these new cities we can freely test and experiment with new technologies like 5G, or autonomous vehicles, drones and the latest in robotics. We need to announce to the world that there is something unique and different about the cities we are building,” Mr Sawhney said.

The $100 billion DMIC project plans to create 24 industrial smart cities over the next 30 years, eight of them in the first phase. Four of these – Dholera in Gujarat, Shendra-Bidkin in Maharashtra, IITGNL in Greater Noida and Vikram Udyogpuri in Madhya Pradesh – offer vast investment opportunities for IT/ESDM players, not only in terms of setting up of manufacturing clusters, but in the ICT systems and allied infrastructure that will control city operations and other functions.

“Imports are a severe burden for the industry and the Make in India programme. With the phased manufacturing programme we brought for the cellphones, we have managed to reduce this a bit. We hope to introduce that for more products,” said Mr Sawhney. “For IT and Electronics manufacturing in India, we need contiguous land parcels and a business-friendly ecosystem, therefore projects like the DMIC will be a big attraction for investors.”

Mr Alkesh Sharma, the CEO and MD of DMICDC, noted that it was for the first time in the world that ICT planning of this scale and size is being implemented simultaneously with infrastructure master planning in a city, and not just as an add on.

Additionally, the Special Purpose Vehicles (SPVs) managing these projects are fully empowered to make decisions not just on planning, development and issuing single window clearances; but they will govern these cities for the next two or three decades. By design this system eliminates to a great extent many of the problems that industries in India currently face with regard to land, reliable power supply, clearances and red tape.

“The DMIC offers large, contiguous, litigation-free parcels of land to set up industries. Guaranteed 24X7 power and water supply is available at the doorstep, nearly all environment and state clearances for industrial use are already obtained, high-polluting and red category industries have been completely excluded to ensure sustainability, and multiple financial incentives are on offer for manufacturers, from both central and state governments,” he added.

The IITGNL region in UP, which at 747 acres is the smallest of the upcoming cities but planned for vertical growth, will be an ideal location for IT/ITES, given that the surrounding areas in Greater Noida are already host to such industries, said Mr. Abhishek Chaudhary Vice President - Corporate Affairs, HR & Company Secretary, DMICDC. Trunk infrastructure in this township is scheduled for completion by June 2018.

Another attractive location, especially for IT services, would be the proposed, high-rise Global City which is coming up over 1,100 acres in Gurgaon. With the master planning in place, construction of trunk infrastructure is expected to begin here by March 2018 and be completed by 2020, he said.

He also called for skilling of people living in areas surrounding the manufacturing clusters. “The electronics industry is a heavy employer of women. They need to have at least secondary or senior secondary level of education to work in this sector and the state governments can win in terms of both local employment and providing industries with a resource pool if they put a little more emphasis on the education of girls.”

Mr. Rajoo Goel. Secretary General, Electronic Industries Association of India (ELCINA), said IT/ESDM could benefit much from having plug-and-play infrastructure, in the manner proposed in DMIC cities. Rentable factories at affordable prices as well as reliable power supply are important for component manufacturers, he said.

He suggested that all DMIC regions follow a standard policy for Electronic Manufacturing Clusters and other industries to avoid consistency issues.
Government industry Smart Cities