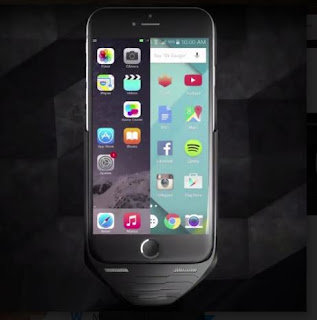 Yerha.com, an e-commerce platform for technology products, today announced the launch of Mesuit, an iPhone dual sim case that runs both iOS and Android Operating system on your iPhone.This unique technology leverages the home device’s dual-SIM, dual-standby featuresto offer simultaneous access to all functionalities of the two OS on a single phone, thus bringing the best of both worlds to you.

The world’s first and only smart hardware that runs Android OS on iPhones in the form of an app and supports one-key hot swapping, Mesuit is a fully-functional mobile device that has its own modem. The user-friendly app displays the usage of battery, memory and storage capacity of the phone as well as the case.Once you download the app & turn the Bluetooth on, your device is ready to be used either as an iPhone or as an Android phone, andyou can easily connect the case with the iPhone via the lightning port.

Mesuit allows the user to run a proprietary Android-based OS with an Apus Launcher, called Mesuit OS 1.0, on iPhone 6/6S. It is powered by Mediatek octa-core processor with 2GB of RAM and 16GB of storage capacity that allows users to store & transfer photos and videos from the phone into the case with a single tap and even enjoy dual Whatsapp, Facebook, Twitter and Instagram on one screen. It works as an external battery pack providing an additional seven hours of talk time and has a slot to insert an additional SIM card.

Commenting on the launch, Mr. Manikant Jain, CEO of Yerha.com said: “An armour for iPhone, Mesuit is like owning two smartphones without having to carry both. The smart, classy, rich looking case not just allows dual-booting by tapping an app icon, but also adds extra battery life, storage, sim slot and access to all android apps on your iPhone.This device has captured the interest of tech aficionados due to its unique functionality and we wanted to make sure that Indian consumers could add one to their cart.”

The best dual-sim solution on the offer, Mesuit case for the iPhone 6/6S, will give a 1,700 mAh backup to the device.Mesuit iPhone6 and iPhone6S case is exclusively available in India on Yerha.com and is competitively priced at Rs. 9,990. Customers can also avail attractive EMI options on the website itself.
IPHONES Mesuit Yerha.com