LOOT, free entry tourney with 640 participants and trending #MadOverPoker, played over 6 hours concluded with a bang 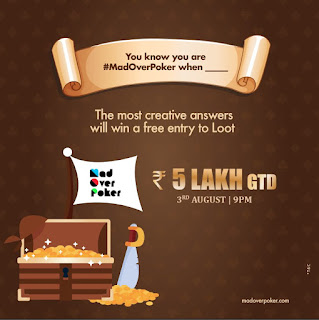 Mad Over Poker (MOP), an early stage poker start-up announces the commencement of their big bang inaugural tournament LOOT. The tournament attracted 1000+ sign ups before the launch.
Ajinkya Hire, was adjudged as the winner of India’s first free entry tournament- LOOT. The tournament had 20 rebuys (Rs. 850 each, which led to increased prize pool of Rs. 5,11,500)

Ajinkya, who is also a professional poker player won over Rs. 1 Lac in the maiden free entry tourney. His journey as a poker player started in the last year of MBA at IIT Kharagpur where he was introduced to FREEROLLS by his friends. Ajinkya who hails from Pune is a poker player with a regular job.

Elaborating on the win, Amit Kanodia, Chief Executive Officer at Mad Over Poker said, "We are excited with the response we received for our launch Tournament LOOT. It was very well received by poker enthusiasts who are looking forward to many more such tournaments. We congratulate Ajinkya for his excellent strategy that won him the tournament.”

Poker, which is associated with glamour and fun, is a burgeoning industry pegged at Rs. 1000 crore. The tournament which involved lot of planning, strategy and calculation, was on for 6 hours. 640 poker enthusiasts playing simultaneously on the online platform was a benchmark set by Mad Over Poker. These players came from different walks of life. There were last minute registrations until 3 hours before the tournament opened.

Inaugural tournament, LOOT reached the zenith of its popularity even before its launch. The hash tag #MadOverPoker was trending on Twitter before the tournament. The question ‘You know you are #MadOverPoker’ asked by the brand on Twitter garnered some interesting replies and engagement from tweeps and poker enthusiasts. Mad Over Poker wowed the participants with user friendly UI and customer support. Timely disbursement of winnings also added to the credibility of the company.

Ajinkya Hire, winner of the tournament, commented, “I generally avoid FREEROLL but Mad Over Poker provided biggest free roll provided by any Indian online poker company. Its UI was so smooth, user friendly and affordable rebuy amount of Rs. 850. Mad Over Poker’s customer service was prompt and has totally floored me. When I won the tournament for over Rs 1 Lac, I expected  to receive the amount in a week. But to my surprise, Mad Over Poker deposited my prize money within few hours of withdrawal request. Mad Over Poker is a tough contender for other big online Indian poker companies. I am looking forward to playing more such tournaments with Mad over Poker. I recommend this to every poker player in India. They are also very ethical when it comes to deducting taxes.”

Talking about his winning strategy, he mentioned that he did not have anything specific in mind. In the beginning he was aiming for small pay jumps. But when he got into Top 5, that’s when he became more focused. When he had good cards he played aggressively. His advice to budding players is to go in FREEROLLS first and then go for buy-ins.

Amit Kanodia further added that, “We hope to continue delighting poker players.  There will be continuous promotions and tournaments which will have something in store for every poker player. We make sure that every player playing on our platform has an amazing experience. We have collaborated with top banks to make payment easier for our customers. We stand for transparency and practice ultimate ethics in disbursing winnings”

Madoverpoker.com (MOP) is one of the few corporatized online poker playing platforms, in a largely unorganized segment in India. Their current focus is to ride the wave of a $50 billion global online gaming industry and to grab the imagination of poker crazy players in India.
mad over poker online poker poker