Indus OS launches new keyboard to free you from typing! 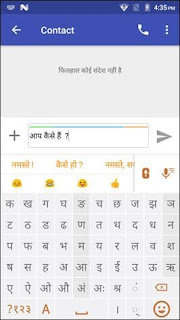 Indus OS announced the launch of its new Indus Keyboard with even more India-centric features. The latest version will introduce speech-to-text in Indian languages, allowing users to speak into the phone in their preferred language while the text will automatically be recognized and displayed by just the press of a button. This will lead the country into a new era of voice based smartphone operation, making the smartphones faster and easier to use. This is the first time that speech-to-text functionality in regional languages has been made available at the OS level. This feature is integrated in the Indus OS’ default keyboard and does not require any additional apps or downloads.

With the latest version of the Indus OS Keyboard, users can also convert their selfies and photos into stickers and GIFs, thus allowing them to express themselves better. These features will add to Indus OS’ existing patented matra predication, auto-correction, text-to-speech, Hinglish keyboard functionality and Indus Swipe (for translation and transliteration). Indus OS has previously collaborated with the government’s Department of Electronics and IT (DeitY) to offer text-to-speech in nine languages.

On the new development, Rakesh Deshmukh, co-Founder and CEO of Indus OS said, “We at Indus OS are keenly observing our customer needs and demands. With a flood of chat platforms and messaging apps, communication is changing quickly, and this new Indus Keyboard recognizes the need of customers to communicate even faster and with greater convenience. Now supporting 23 Indian languages with text-to-speech functionality, Indus OS has very quickly become India’s defacto OS, and we will continue to innovate to serve our customers better.”
indus os Keyboard mobility