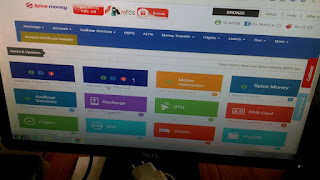 The Indian economy is steadily gaining momentum brought about by the Digital India movement. According to the Voice of Asia report by Deloitte asserts that India is one of the leading players of digital transaction.  It says that the government has managed to save INR 36,144 Crore over the course of last two years by directly transferring benefits via the Aadhaar Payment Bridge. In February this year, Gujarat became the first state in India to set up a cashless system in its food grain PDS. AEPS was installed in approximately 17,250 fair price shops to make sure that people eligible for subsidised food grains under the National Food Security Act (NFSA) would only need to present their Aadhaar numbers to collect the allotted rations.

Spice Money, Spice Digital’s Fintech initiative has been continuously working toward its vision of serving the underserved. Spice Digital was granted the PPI (semi-closed) wallet licence from the RBI, way back in 2015, since then Spice money has spread far and wide with the conviction to bring technology solutions to financial needs of the masses. Spice Money has, in fact, crossed the 550 crore mark GMV in the month of July 2017 thus solidifying its credentials in the post demonetization era.

India is a nation deficit in the required no. of ATMS. According to the recent statistics by Central Bank there is one cash point for every 6,500 Indians. AEPS biometric transactions are a convenient alternative to cashless payments and ATM services. Even for the banks, setting up and maintaining an ATM unit requires a certain amount of spending, AEPS transactions will not only be convenient for the end consumers, it will all be an economical solution for banks. Needless to say, rural areas and the underprivileged of the nation are the worst affected. Daily wage earners often find it difficult to avail banking services due to the hassles of formality and time. Visiting ATMs or even for that matter always keeping cash in hand is a cumbersome job. Spice Money counters enabled as Mini-ATM via AEPS, will make life much simpler. With spice money retail outlets reaching far and wide, walking miles to find an ATM will no more be a hassle. Aadhar enabled payments made via biometric verification are not only convenient but also safe. In support of the government’s vision and endeavours toward a cashless economy, Spice Digital is gradually paving the way toward digitization in the farthest corners of our nation.

Spice Digital Limited is an organization that moves ahead with the times and has chosen to extend the benefits of a changing economic environment by offering biometric transactions to the remote areas of India through Spice Money. While making AEPS accessible to the sections of India that rarely feature on the economical map of the country.

Mr. Saket Aggarwal, Global CEO, Spice Digital said, “With 30,000 direct retail points and 100,000 counters of alliance partners, Spice Money has established its roots deep and is only reaching further ahead while growing steadily. Spice Money is in the process of enabling all their counters with AEPS consistently while adding to the existing number of counters.”
biometric digital Digital India industry spice money