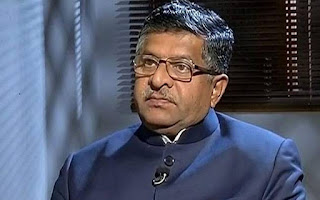 “Let me tell all mobile manufacturing units that your product must be security-compliant, there shall be no compromise on that,” said Mr Prasad while addressing an ASSOCHAM conference on Cyber and Network Security.

He also said that IT and Electronics department had issued notice to most of the mobile companies manufacturing smart phones they were asked to furnish details related to cyber security. “I am very keen that cyber security initiative of India must become a lesson for the world.”

“I have told the UP chief minister also that Noida and Greater Noida has great potential of becoming a center of software park, educational and management hub and other commercial activity,” said Mr Prasad.

Highlighting the various initiatives being undertaken by the Government with regards to cyber security he said “Every digitally connected industry must have cyber security officers who must be able to tell you what precautions you must take in an industry and business to keep cyber criminals at bay that is what we are insisting.”

Talking about the need to create human resource in field of cyber knowledge, he said that 44 universities and colleges have been identified in this regard.

The union minister also said that there have been three phases of growth of India’s IT industry, whereby in phase one Indian IT companies became the ‘toast of the world’ while in phase two international giants like Amazon, Google, Facebook, Twitter and others came to India considering it a huge market.

“The third phase is that of India’s domestic IT initiative, startup movement which is growing very fast with 3-4 startups are coming up everyday,” said Mr Prasad.

“We have about 5000 startups in India today and many of them are becoming unicorn companies i.e. Rs 1,000 crore companies like Flipkart and others, this digital ecosystem of India is going to rise and no one can stop this march,” he added.

He further said that India’s digital economy which is today worth $500 million has the potential to become $1 trillion in the coming 4-5 years as digital highway of India is growing very fast.
Cybersecurity Government mobile security standards security