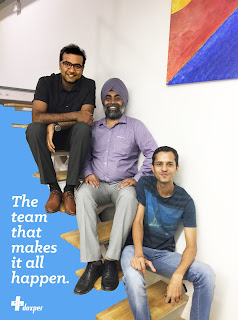 Heathtech startup InformDS Technologies Pvt. Ltd. which runs Doxper, has raised seed round of investment of 750K USD led by Vidal Healthcare and growX ventures. Other investors are Capier Investments, Globevestor and angels including a leading onco-surgeon in the country.

Girish Rao, MD of Vidal Healthcare and Siddharth Dhondiyal representing growX ventures have joined the board of directors of Doxper, a company founded by three IIT alumni - Randeep Singh, Shailesh Prithani and Pawan Jain in January 2016

Doxper aims to introduce the most natural way of integrating technology in the national healthcare ecosystem. A big missing piece in healthcare digitization today is doctors' notes, which do not get captured and recorded digitally anywhere. Present EMR/EHRs are intrusive and clinicians are uncomfortable fiddling with computers or tablets. Moreover, these hamper the natural doctor-patient interaction. Doxper’s solution combines unique digital pen and coded paper system along with various technology elements powered by data science algorithms to digitize health records on the fly. The solution fits seamlessly into the existing clinical workflow without altering any step of the doctor-patient interaction that leads to its instant acceptance with doctors.

In a span of little over a year, Doxper has gained a lot of traction from some of the best doctors in the country. Over 400 leading physicians and specialists have become users including AIIMS Breast Cancer Clinic, Prashanti Cancer Care Mission, Biocon Foundation, Jain Fertility & Mother Care Hospital, Healthskool, Drishti Eye Center, Southend Fertility & IVF, and others. They are also piloting with many big hospitals today.

Doxper is also one of the elite Solvers at this year's Solve cohort at MIT, USA. It won SOLVE challenge hosted by MIT. SOLVE is MIT's initiative for "Solving the world’s most pressing challenges through open innovation and partnership". Doxper's proposal was shortlisted from an application pool of over 150 globally to pitch at UN HQ in New York in March this year. Doxper not only won the challenge, it received tremendous appreciation at the world stage for its simplistic approach and solution to a bigger problem globally.

“Capital raised will be deployed to scale up operations and to further enhance technology platform by improving or adding more layers on top of the current stack including machine learning, handwriting recognition and AI for better care outcomes. The vision is to make Doxper the de-facto choice for healthcare digitization in India and other emerging markets.” explains Shailesh Prithani, Co-founder and CEO of Doxper.


In a joint statement, Mr. Girish Rao and Mr. Siddharth Dhondiyal said, “Doxper is trying to solve a problem that is inherent and specific to developing countries like India and not blatantly copying what's applicable in the west and replicating here. Problem of not recording healthcare data in digital format is an expensive one and when solved has benefits of exponential proportions. The simplicity of the solution is the biggest USP of Doxper. While almost all the computer or tablet based EMRs/EHRs have failed to get any significant traction with doctors, specialists & super specialists, Doxper is receiving momentous attraction from all the doctors and even KOLs as pen and paper resonates with them way more than computers or tablets. What thrilled us was the initial traction Doxper got with institutions like AIIMS and Prashanti Cancer Care. With the help of Biocon Foundation, Doxper reached to the remotest of the corners of the country, in limited resource settings, and captured data without hassles.”

Doxper is actively servicing doctors in Delhi/NCR, Jaipur, Pune, Bangalore and Mumbai today. It also remotely supports a few doctors in other cities who are early adopters with keen interest in technology and Doxper’s solution.