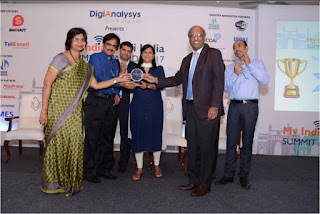 India’s major telecom services provider, the Bharat Sanchar Nigam Limited (BSNL), has of late emerged from its shabby past under the dynamic leadership of present CMD Anupam Shrivastava. As a testimony to his outstanding achievements the BSNL CMD was conferred the Wi-Fi Leader of the Year award and BSNL was felicitated the Best Wi-Fi Service Provider.

The day-long summit themed ‘My India-Wi-Fi India Summit & Awards 2017’ was organised by leading digital media organisation DigiAnalysys in New Delhi with the active support and cooperation from leading players in the telecom industry.

BSNL was awarded the Best Wi-Fi service provider in the country. The company has crossed the 10,000 hotspot mark in the current year.

Earlier inaugurating the conference, South Delhi Municipal Corporation’ Mayor Kamaljeet Sehrawat while hailing the efforts of the organisers said, “Wi-Fi has now become a necessity of a common man’s life and innovative approaches should be adopted for its seamless spread along the width and length of the country”.

The summit spread along four sessions had discussions on a wide range of issues and subjects in the Wi-Fi sector in which industry veterans, experts and stakeholders participated. The panel discussion on themes like Connecting the Unconnected; Public Wi-Fi Business Models: Scalability, Sustainability and Interoperability; and Public Wi-Fi in Villages: Deployment, Innovation, Security and Applications were highlights of the summit in which ideas were shared and discussed by who’ who of telecom industry from various sectors.

On this occasion, a Wi-Fi Hotspot Report - 2017 was also unveiled. The report has been prepared by DigiAnalysys in association with Rethink— a technology research outfit. The report talks about Wi-Fi hotspot market to be 45,000 in India as on March 2017 and this is forecast to reach 550,000 by March 2020 due to BharatNet Village Hotspots, College hotspots, retail hotspots, PDO/PDOA hotspots and Bus hotspots.
Airtel BSNL WIFI