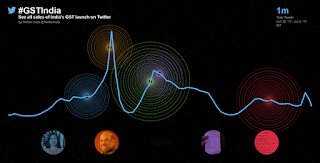 Twitter is the best place to know what’s happening around in India and to talk about it. Over the weekend, Twitter saw over one million GST-related Tweets (between 30 Jun - 2 Jul 2017) as the whole country flocked to the platform for live breaking news and updates on the launch of GST in India. From #GSTIndia to #GSTForCommonMan, conversations on Twitter echoed the nation’s mood and its temperament towards an event of national significance.


As the launch of GST took place at midnight, people took to Twitter to express their opinions and conversations on the platform peaked at 12:30 AM on July 1st with 1.1K Tweets per minute. Top hashtags around the conversation show all sides to the story, including: #GSTCouncil,  #GSTIndia, #GST@GoI, #GSTRate, GST, #GST, #GSTsimplified, #IndiaforGST,  askGST, #GSTForCommonMan, #HalfCookedGST, #HalfBakedGST.


Mahima Kaul (@misskaul), Head of Public Policy and Government, Twitter India said, “Conversations around the launch of the GST exemplify Twitter as the best place for people to connect with what’s happening in India and around the world and express their opinions. The platform witnessed a myriad of perspectives from Indian audience supporting as well as raising their concerns about the same. With more than a million Tweets on GST, we hope the public feedback will help to facilitate greater citizen engagement on the topic.”