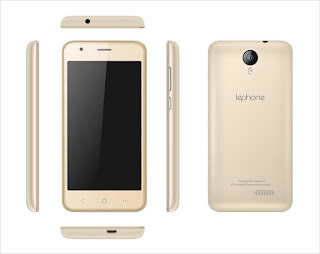 lephone has come out with yet another smartphone in the Indian market. The company is eyeing the growing 4G market in India and looks at tier2, 3 and 4 cities for its smartphones. lephone is a Chinese Smartphone maker, which has introduced lephone W2, a new entrant in the entry-level 4G VoLTE budget Smartphone market as a part of its Smartphone series. The model packs in an array of dazzling features in a portable 4.5-inch size and comes in four color variants – Black, Golden, Rose gold and White + Gold.

Speaking on the occasion, Vinod Pandit, Business Head, lephone Technology Pvt ltd, said “lephone is leveraging a platform with an affordable yet power packed device, as it offers the flexibility to address users' increasingly varied demands.  Lephone W2 offers all the latest specifications and is arguably the best model in its class in the market.”

lephone W2 can deliver ultrafast performance with its 1.3GHz Quad core processor coupled with 1GB RAM and 8GB of inbuilt storage which can be further expanded up to 32GB using a microSD card. The phone has a 2MP rear snapper with LED flash with a VGA front camera. Moreover, the device comes with a G-sensor which helps while playing games and 11.43 cm FWVGA display which makes sure that images are not cropped while viewing one. This model offers not just a wide variety of emojis and symbols to enhance text communication, but also 22 Indian regional languages including Hindi, Assamese, Punjabi, Bengali, Gujrati, Kannada, Malyalam, Marathi, Tamil, Nepali, Bodo, Telugu, Urdu, Sindhi, Odia, Sanskrit, Kashmiri, Dogri, Maithili, Santhali, Konkani and Manipuri

Another remarkable feature of the device is that it runs on Android 6.0 Marshmallow powered by “360” which showcases many features and useful apps like dual account support avatar master, 360 Clone, 360 security and much more.