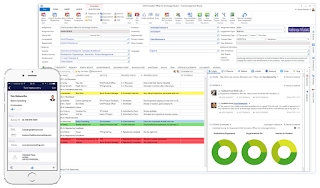 Invenias, a cloud-based platform for executive and strategic hiring, announced that a rescue package has been provided to customers of 1-Click Software, also known as Darwin. The sudden closure of Darwin meant that the company was no longer able to provide an ongoing service to its 80 plus customers.

Darwin approached Invenias who agreed to offer an immediate proposal to existing customers whereby they received ongoing service from the firm. To date, over 80% of Darwin’s customers, 71 companies, have been successfully migrated onto the Invenias platform within 4 weeks, with minimal disruption to their business.

Mike Chatha, Director at Darwin partnered with Invenias because he felt that it was the best company in the market to offer his customers a viable alternative that enabled customers to continue to meet the needs of their clients and candidates, with an exceptional level of service.

Invenias created a structured program to introduce Darwin customers to its platform, which included the migration of their data and set up in Invenias, along with training and support allowing them to get the most out of the software. The training and support team from Darwin have joined Invenias to ensure that customers can talk to people that they already know and trust to guide them in the transition from Darwin to Invenias.

David Grundy, CEO, Invenias said: “We developed a rescue package so that our industry retains a good name for reliability and trust. This proposal ensures that customers get the continuation of service they need and want, and experience the Invenias platform which has had significantly more investment in development, has many more features and a much higher level of IT security and protection. The 71 Darwin customers will be joining a community of over 850 executive search firms and specialist recruiters who have already selected Invenias as their preferred solution in the market.”

The response from Darwin customers has been overwhelmingly positive, as Richard Dobbs, Director, Digitevo commented: “Despite the shock of what has happened to Darwin, we are very grateful to Invenias for coming in as the ‘white knight’. We have been impressed with the ease and speed of migrating our data to the Invenias platform and are looking forward to being customers of the company.”