India selected its representative under Electronics category for the Worldskills 2017 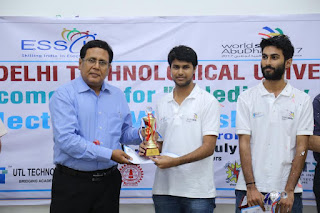 The series of electronics skill championship ended on 1st July 2017 and with this India finally selected its representative in the electronics skills for the Worldskills2017, an International skill tournament popularly known as “Skill Olympics” in the world.

Harsha Prabakaran from Chennai bagged the opportunity to represent the nation in electronics category at the Worldskills 2017 while Sumir Kumar Jha from Delhi became the runner up. Harsha Prabakaran​,​an electronics ​engineer is a graduate from Chennai Institute Of Technology, Chennai and believes that “ Skills play an important role and students should focus upon enhancing their electronics skill by working on live projects.”

The Championship was organized by Electronics Sector Skill Council of India (ESSCI) with support of Emtech Foundation and hosted by Delhi Technological University, New Delhi. The two contenders proved their mettle over a 17-hour task, which included schematic design, PCB design, embedded system programming, fault finding, repair and measurement. After a tough competition, Harsha Prabakaran won the title and made his way for the final competition.

For the final showdown, the winner will be trained at international electronics manufacturing firms to meet the standards of the Worldskills which will take place in Abu Dhabi during October this year. The final selected candidate will be felicitated by Hon’ble Prime minister Sh. Narender Modi on 15th July,the World Youth Skills day.

Worldskills being an international platform witnesses participation from over 77 countries across the globe in 50 different skills.
Electronics industry skills Training Worldskills2017