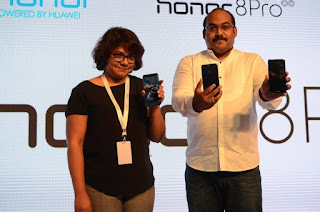 With cutting-edge processing power, long lasting battery life and 14.47cm 2K display, the Honor 8 Pro with dual-lens camera is packed into an impossibly thin 6.97mm body. Continuing in the vein of tying up with Global Brands to enrich their smartphone experience, the Honor 8 Pro has been designed under the partnership with Amazon, Gameloft, GoPro, Jaunt VR and Deep Silver Fishlabs to enrich digital lifestyles through enhanced smartphone experiences.

P Sanjeev, Vice President Sales, Huawei India-Consumer Business Group, said, “Honor is committed to scale new heights of product innovation and customer centricity through its products. We are focused on embedding powerful features in our devices at an affordable price to accommodate consumers’ lifestyle. With the Honor 8 Pro, we set out to push the boundaries on all fronts. The Honor 8 Pro offers market-leading specifications by pushing the boundary of smartphone design, providing 2K display, extra-long battery life, dual camera setup and delivering powerful performance to ensure best experiences across the scenarios that today’s smartphone users care most about. Honor can do this like no other due to its unique e-commerce business model and world-class R&D capabilities.

After the huge success received from the Honor 6X, Honor continues to partner with Amazon India to launch the Honor 8 Pro as an Amazon exclusive. Commenting on this partnership Noor Patel, Director Category Management, Amazon India said “We are delighted to be the partner of choice for the launch of Honor 8 Pro and are pleased to offer Prime members exclusive access to their smartest device to date. Smartphones on Amazon.in have continuously been a top selling category and we will continue to explore many such symbiotic partnerships to offer our customers the best of selection across categories.”

Providing a crystal clear 2K display running on a massive 4000 mAh battery on the best-in-class hardware and software, the Honor 8 Pro is an ideal device for all game lovers and thus comes with the coveted recommendation from Gameloft. Appreciating the device, Florent Vallauri, MD- SEAP & ANZ- Gameloft said "Honor Pro 8 has raised the bar and is one of the best phones in the market for gaming. It’s crisp display, powerful chipset and a long battery life makes Honor 8 Pro an ideal gaming companion to enjoy long hours of playing Asphalt 8 and Modern Combat 5. The device packs a powerful punch when it comes to immersive gaming experience and superior performance".

Price and Availability
The Honor 8 Pro will be exclusively available to Prime members on Prime Day starting 6 PM on July 10th on Amazon.in priced at INR 29,999 for the 6+128GB storage variant and will be available in Midnight Black and Navy Blue color options. The device will be bundled with a 9V/2A fast charger, standard USB-C cable in a box that can be used as a VR headset. The Honor 8 Pro will come with 12 months service warranty along with Honor’s best-in-class after sale facilities offering additional piece of mind for the consumer.

India is one of the key markets for Honor and the company plans to grow exponentially with the new gamut of product offerings. The global smartphone major has revamped after sales services with over 250 service centers across the country.  The company is also expanding its distribution network by partnering to create a comprehensive nationwide distribution system.

Honor today also showcased a new Honor Band 3 with intelligent tracking features like heart rate monitoring, walking/running and sleep tracking. The Honor Band 3 is also the first device of its kind to feature 50metre water resistance and 30 days battery life on a single charge*. The new band will come in three funky colors and will be announced later this month exclusively on Amazon.in.

Lead the Experience
Multimedia and games shine on the Honor 8 Pro owing to its 2K display which boasts of the highest levels of color accuracy and detail – with performance nearing the Hollywood cinema standard. The display features a high resolution of 515ppi, 79% screen-to-body ratio, 16700K colors and 94.5% coverage of the NTSC color gamut. Professional calibration brings the best out of the display, with color enhancement technology, sharpness enhancement in the display engine and a 2D image detail enhancer. With high contract of 1500:1, Honor 8 Pro ensures better color accuracy and enriched details in display. When watching videos on the phone, Honor 8 Pro will automatically optimize the screen display and adapt the contrast level to deliver the best cinema-like experience to users.

Immerse yourself in the VR world as this device comes bundled with a cardboard viewer and an OTA update for the Jaunt VR app containing a wealth of video content. Users can also dive into the exhilarating world of Galaxy on Fire 3, with their own customized Honor Spaceship and enjoy 3D gaming owing to the first of its kind Vulkan 3D API.

Despite its high performance, 2K display and slim profile, the massive 4000 mAh battery provides 2 days of regular use*, and almost 1.44 days of heavy use. The high density (710 Wh/L) battery running on the 16nm processor coupled with advanced power-saving features spell the end of battery anxiety. The Smart Power 5.0 technology helps to maximize battery life by automatically identifying and terminating processes with exceptionally high power consumption, as well as minimizing power consumed by background applications. In the meantime, it also manages alerts to optimize power consumption when the phone is on standby.

Lead the Performance
The Honor 8 Pro is the highest qualified and best performing smartphone ever created by Honor, till date. Running on the latest 16NM Kirin 960 octa-core processor backed by 128GB ROM (that can be further expanded via micro SD card to 256GB), it tackles the issue of fragmentation and lag that has long beset Android devices. The Honor 8 Pro is improving the gadget’s CPU single-core and multi-core performance by 10% and 18% respectively, making it faster to open applications. The GPU performance is increased by 180%. Furthermore, the EMUI5.1 enables the general optimization of Android and minimizes stuttering issues.

The Honor 8 Pro has been engineered from the ground up to meet the performance needs of today’s power users and gamers, with industry-leading hardware and software that delivers extreme speed:

·         The all new Kirin 960 chipset features eight processor cores – four high-performance Cortex A73 cores clocked at 2.4GHz and four low-power Cortex A53 cores clocked at 1.8Ghz – that improve single-core and multi-core performance by 10% and 18% respectively.
·         The Mali-G71 includes support for the cutting-edge Vulkan graphics, computes API (application programming interface) and boosts graphic performance up to 400%. Honor 8 Pro will run the most demanding games at high frame rates with minimum lag and dropped frames, even in 3D.
·         The new EMUI 5.1 designed for Android Nougat, constantly learns from your behavior and habits. For example, if you tend to open an app at a certain time of the day, the system would keep track and load the app in anticipation of your opening it. Lab experiments show that the Honor 8 Pro retained its smooth performance even after an increase in memory fragmentation and files, applications, and associated application data and junk files. This shows that the Honor 8 Pro has managed to successfully overcome the fragmentation issue usually associated with Android-operated systems.

Lead the Photography
The Honor 8 Pro’s combination of cutting-edge hardware and software culminates in its 12+12-megapixel dual-lens camera. The two lenses work in tandem to always deliver the perfect shot: the monochrome lens captures a black-and-white image with incredible depth of detail while the RGB lens ensure faithful and vivid color reproduction – and sophisticated software brings the best of two worlds together. The camera’s wide aperture range (f/0.95–f/16) delivers the DSLR-like depth of field effects for both photo and video shooting. The Honor 8 Pro brings perfect optimization of hardware and software to deliver that perfect shot.

The device also supports 4K video recording, encoded in the efficient H.265 codec, which produces files twice as small as its predecessor. Thanks to the EMUI 5.1, Highlights-a new feature co-developed with Go Pro, intelligently organizes photos by category and automatically generates video stories that are easily customizable – making sharing memories a breeze.

Lead the Craftsmanship
The metal-bodied Honor 8 Pro looks simply stunning. Its tiny bezels flow seamlessly along the edges, creating a visual masterpiece, which is also coupled with a diamond cutting process using CNC for greater precision to create one of the slimmest smartphones ever. Micron-level sandblasting and a 360° high-pressure air polishing process helped to produce a phone that is extremely smooth to the touch.
Despite supporting a massive 4000 mAh battery, dual-SIM hybrid slot, and a 14.47 cm 2K display, the  Honor 8 Pro’s ultra-thin 6.97mm metal body is a compact cluster of over 1,000 components, a perfect blend of functionality and aesthetics. Its exquisite silhouette is uninterrupted, with all parts, including the dual-lens camera, sitting flush with the body. Whether in navy blue or midnight black, never has a 14.47-cm screen smartphone looked so sleek and stylish.