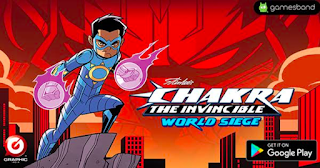 Chakra: World Siege is currently available for free on the Google Play store and was featured as one of the top games in their “New and Updated” section. “Chakra: World Siege” has been launched globally with a focus on targeting the Indian audience.

The game is based on the animation and comic book character “Chakra: The Invincible” created by superhero icon, Stan Lee and Sharad Devarajan. Lee is the legendary co-creator of the world’s most popular superheroes including Spider-Man, X-Men, Fantastic Four, Iron Man, Hulk, The Avengers, and more.

Stan Lee, brimming with enthusiasm added, "Against the spectacular backdrop of the great Indian metropolis of Mumbai, we tell the incredible saga of Chakra, one of my most exciting superhero creations, whose adventures will captivate audiences around the world."

Chakra: World Siege involves the user playing as Chakra in a challenging quest to save the world from his long-time nemesis, the evil Boss Yama. The game is an action-packed running game that takes you on a journey through the Seven Wonders of the World to ensure their safety. As Chakra, players must jump and dodge various obstacles and unlock their “chakras,” to gain special powers and superhero moves needed to save the world.

“Stan Lee’s characters have generated $15 billion at the global box office, creating some of the most beloved icons in entertainment. More people today likely know the face of Spider-Man than they do the Mona Lisa,” added Sharad Devarajan, Co-Founder & CEO Graphic India. “I have no doubt this will be the first of many new games for our Indian superhero as we grow Chakra to become a successful gaming franchise in the future. Gamesbond and underDOGS have been amazing partners and creative collaborators to help us bring this game to audiences worldwide.”

The Chakra: World Siege game launch coincided with the airing of the third Chakra-The Invincible animated TV film, “Chakra: The Mystery of Mighty Girl” which premiered on Cartoon Network. The Indian superhero character is also in development as a theatrical live action Bollywood film, to be directed by acclaimed filmmaker, Vikramaditya Motwane and produced by Phantom Films, POW! Entertainment and Graphic India.

“We are excited with our collaboration with Graphic India and underDOGS studio for the Chakra game and the instant success it has seen will help us strengthening our collaboration towards investing more in the partnership. The Chakra franchise is quite popular among kids and the game is designed in a way that even a 5 year old kid will be able to understand, play and stay engaged”, says Anshul Singhal, VP products at Mauj Mobile. Talking about their plans he added, “We believe that with our understanding of the gaming consumers and distribution strengths; we are the ideal publishing partners for local IP owners and game developers towards creating and sustaining a successful game for the Indian users”

The Game is available for download on Google Play (https://play.google.com/store/apps/details?id=com.gamesbond.chakraworldsiege) and it will be soon be made available on the Apple App Store.