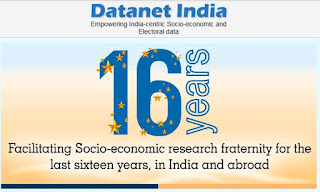 Datanet India, a sixteen year old Information Technology enabled Services Company, has launched the much needed District Factbooks for India which will provide the compiled publications of the latest district level socio-economic data. These data will be available for 560 out of 640 districts in India for over 15 categories. Datanet India is in the business of collecting and compiling district level data for past 15 years and has 720 web sites.

Earlier these district level data, collected through government agencies, were not available on one platform and the government publications were published late. Datanet Factbook will help simplify the work process of collecting data by compiling all the data and making them available on one portal.  All passionate data-seekers would benefit from this one-stop data guide to make out easily where the district stands in the Indian platform. The statistical data, maps, graphs and charts shown offer the exhaustive information about a particular districts. Considering the potential usage of these District Factbooks, these are being made available online at its portal www.datanetindia-ebooks.com and are also being offered in print, eBook and web access formats to cover the vastly scattered users.

These socio-economic data are mainly used for the district level strategic planning and research by the policy makers, academicians, researchers and marketers to assess the status of a particular district on various socio-economic parameters. These data would further help in comparing different districts within a state and also with the nation.

Talking to the media about this launch, Co-founder and Director of Datanet India Dr. R.K. Thukral said that Datanet India has 720 websites and is into collecting data on India, its sectors, regions states and district and has been serving the socio-economic research fraternity in India and abroad for the last 16 years. He further added that the efforts of Datanet India have been recognized by Limca Book of Records for having the largest cluster of websites providing socio-economic statistical data.

Datanet India had ventured with its first web portal www.indiastat.com in 2000 and since then has increased its services many fold. Indiastat.com, a prime website  of Datanet India which is the most comprehensive e-resource of socio-economic statistical data about India and its states, is now a cluster of 56 associate sites, out of which 19 web sites are sector-specific, 31 web sites are state-specific and 6 are region-specific. In January 2010, the company introduced www.districtsofindia.com which provides socio-economic statistical information of 620 districts, out of 640 districts of India, as per census 2011. It had launched its portal www.electionsinindia.com in 2013 which provides constituency-wise election data, since independence, for all the 543 parliamentary and 4120 assembly constituencies in India. Besides, the company has also published many publications related to pre and post - electoral analysis.

Dr. R. K Thukral also said that books on statistical data of Indian districts are few and far from comprehensiveness. Out of 640 these District Factbooks have been released for 560 districts and remaining 80 districts are under process. The categories covered in these fact books are Administrative Setup, Demographics, Economy, Market size, Life style, Infrastructure, Industries, Labor and Workforce, Agriculture, Education, Health, Environment and Pollution, Housing, Crime and Law, Social and Welfare Schemes, Electoral.

Datanet India’s services are being subscribed by all the IIMs, IITs, ICSSR & ICAR institutions. Other than these Indian Institutes almost all the Ivy League Universities from USA and Cambridge, Oxford & LSE from the UK are the few esteemed members. They claim that these District Factbooks will be useful for Academicians, Government Officials, Economic Researchers, Marketers, Media Professionals, Strategic Planners, NGOs, Consultants, Policy Makers, Libraries, Start-ups, and Political Scientists.