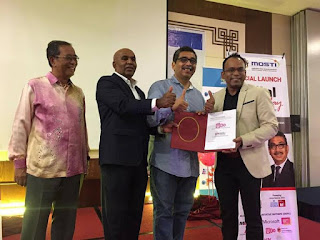 In a prolific move to capture the attention of foreign markets, while surging on with its expansion plan, UDO, mobile app which helps people get connected to their Udo buddy and seek expert advice related to any problems he or she is going through, and also provides M-employment opportunities as experts, has successfully launched its platform in Malaysia. To facilitate this extension, they have partnered with Digital Edu, a program launched by the Honourable Deputy Minister for Science, Technology and Innovation, Dr. Abu Bakar Muhammad.

In the coming months, UDO will conduct an extensive market research, initiating their pre-registration process in a swift fashion. While the association was announced at public forums on 21st May, 2017, they will be launching in September 2017 with their Android and IOS versions. The event was graced with the esteemed presence of Mr.Wemel Cumavoo, CEO Digital Edu, and Mr Repin Ibrahim, Former COO, Malaysian Open Univeristy. The Deputy Minister had commenced the launch, amidst great interest from both Malaysian and Indian audience. The app’s strategic partner’s iAugmentor and Indoeurosync, were also part of this event, giving it an stalwart- studded feel.

Speaking on the launch, Mr Teja Gudluru, Founder and CEO, UDO said“We are thrilled to expand our business to foreign shores within one month of our Launch. The fact that we are able to do this without any formal funding gives us assurance about our product. UDO’s launch in Malaysia, alongside the partnership with Digital Edu marks a new avenue of prosperity and innovation for us at UDO.”

He further added,“This collaboration ushers in a new possibility for advanced business and technological relations between India and Malaysia and we areglad to be amongst some big brands, in forerunning this prospect. The presence of our strategic partners’teams as a part of this initiative has bolstered our belief to surge ahead in our tryst for optimal innovation. We promise to inject a fresh lease of life in the technological ecosystem, bringing in prolific advancements to benefit both India and Malaysia.”