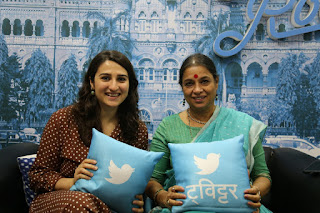 Twitter announced the launch of #TweeSurfing, a public education initiative in collaboration with Centre for Social Research to address online safety issues and spread knowledge on how people can express themselves and engage positively on the platform. In the pilot phase of the project, Twitter undertook various online safety workshops with Center for Social Research, in universities across geographies, like Coimbatore, Noida, Chitkara and Leh.

At the event, Twitter introduced the #TweeSurfing website (http://tweesurfing.in/), a web resource for people to learn more about safety on Twitter. Comedians Kaneez (@kaneezsurka), Sorabh Pant (@hankypanty), and Rohan Joshi (@mojorojo) were also announced as #TweeSurfing Ambassadors, sharing their personal experiences of being high-profile Twitter users and presenting the latest tools and policies aimed to improve Twitter for everyone. Going forward, some of India's biggest and most influential stars from all walks of life added to the campaign as ambassadors to help spread the word.
Today’s launch event and website unveiling are just the beginning for #TweeSurfing campaign. Over the coming months, we will roll-out an ongoing series of educational workshops, with a particular focus on rural India and government universities. Outside of Delhi, Mumbai and Bangalore, we'll be taking #TweeSurfing to colleges in Chennai, Kanyakumari and Coimbatore, before heading to the North East.
#TweeSurfing will also be introducing a new 14 day virtual internship program called TweeShip. The program, delivered through Twitter DMs, and the @Tweesurfing handle, will train users who sign up on how to create Twitter campaigns for social social change, and then let them practice what they have learnt in a real campaign. The modules will be available in English and Hindi.

Commenting on the launch of #TweeSurfing, Mahima Kaul (@misskaul), Head of Public Policy, Twitter India said, “Ensuring people in India understand how they can express themselves and engage positively on Twitter is a priority for us. We work with a range of partners to educate users on safety, and Center of Social Research have been a key part of this, so we’re proud to collaborate with them to launch #TweeSurfing.”

Dr. Ranjana Kumari, Director, Centre for Social Research and President, WomenPowerConnect - ‎Centre for Social Research said, “Through our active engagement with Twitter for the past one year, we have managed to reach out extensively to the youth as well as digital influencers. Our experiences have been collated in this website resource which addresses online safety and effective communications on Twitter. I am happy to see that Twitter India is engaging in important issues and we're glad to be on their safety advisory board.”

Safety is a core priority for Twitter in India and worldwide. Recently, Twitter introduced updates that leverage the platform’s technology to reduce abusive content by stopping the creation of new abusive accounts, bringing forward safer search results, and collapsing potentially abusive or low-quality Tweets. Features that provide users with more control to personalize their Twitter experience for example, the ability to mute notifications for keywords and conversations as well as filtering options have been given to users to allow more control over what they see from certain types of accounts, like those without a profile photo, unverified email addresses or phone numbers.

We’ve also been busy in India working with a number of local partners and organizations to help more people express themselves on Twitter and to feel safer doing so, including educating the community on how to stay safe on Twitter, and supporting the vital work of our safety partners. You can learn more about these initiatives here.