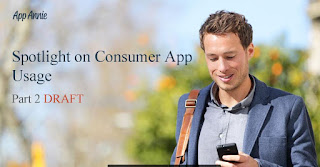 App Annie, the most trusted mobile app data and insights company, today released a second report on consumer app usage that continues to project the app spend by the consumers in 10 major markets.

·         In the ten countries analyzed, the users on average used over thirty apps per month and over nine apps per day.
·         Nearly 75% of users install at least one app per month.
·         The average user’s time spent varied widely between countries, from just over 1.5 hours per day in France to well over 3 hours in South Korea, where average Indian user’s time spend was 2.5 hours.
·         In terms of time spent per user, mobile gamers in Japan and South Korea far exceeded those in the other countries.

App Annie delivers the most trusted app data and insights for your business to succeed in the global app economy. Over 800,000 registered members rely on App Annie to better understand the app market, their businesses and the opportunities around them. The company is headquartered in San Francisco with 450 employees across 15 global offices. App Annie has received $157 million in financing from investors such as e.ventures, Greenspring Associates, Greycroft Partners, IDG Capital Partners, Institutional Venture Partners and Sequoia Capital.