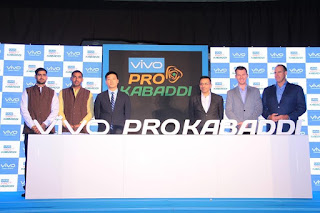 Through this association VIVO aims to strengthen its consumer connect with audiences across India as Pro Kabaddi League is the second most followed sport after Cricket. This will help in achieving a stronger brand recall and excellent visibility for the brand.

Speaking about VIVO Pro Kabaddi, Sanjay Gupta, Managing Director, Star India said, “We are delighted to have VIVO as our title sponsor, as they happen to share a common vision with Star Sports to make Pro Kabaddi one of the finest leagues in the world. VIVO coming on board as the title sponsor is a significant milestone in the growth story of the league. Star Sports will continue its efforts to elevate the stature of the sport further.”

Pro Kabaddi has seen a phenomenal growth over the last 4 seasons with packed stadia and record viewership numbers, emerging as a benchmark for sports leagues in India. Significantly, the high popularity of Pro Kabaddi has evoked continually surging sponsor interest. This fast-growing interest from across the ecosystem reflects the national appeal of the sport.

Speaking on the occasion, Mr. Kent Cheng, CEO, VIVO India said "We are thrilled to partner with Pro Kabaddi league as the title sponsor. This association is important for us as Pro Kabaddi league has reached incredible heights and now proudly stands as one of the most successful leagues in India.

Earlier seasons have shown that Kabaddi is a sport whose popularity cuts across all audiences. With this association, Vivo aims to target the right audience and capture the hearts of Indians. We would like to wish Pro-Kabaddi league huge success for the years to come."
mobility pro kabaddi league sponsorship vivo