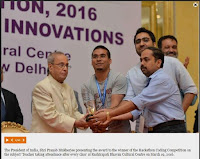 Mahindra Comviva announced that it has received the top honors at the Hackathon for Social Innovations 2016 for its innovative idea on intelligent attendance system for schools.  The award was presented by the President, Pranab Mukherjee at the Rashtrapati Bhavan, New Delhi on 19th March 2016 in the presence of eminent speakers like Karl Mehta, Founder of Code for India and founder-CEO of EdCast, and Mohandas Pai, Chairman, Manipal Global Education. The panel of judges included eminent personalities from industry and commerce including Mohandas Pai, R.Chandrasekhar (President of NASSCOM) and Sharad Sharma (Co-founder and Governing Council Member iSPIRIT Foundation).


Mahindra Comviva’s team “Golden Diggers” presented a solution that helps in automating school attendance systems with the use of NFC enabled ID cards provided to students and teachers. In order to activate the system, the teacher will have to tap the card on the NFC enabled device to unlock the attendance system, which in turn will allow the student to mark attendance by tapping their ID cards on the device.  In the production phase, the process will be carried out seamlessly using motion sensors, RFID enabled devices and ID cards, so that neither the teacher nor the students have to record their attendance manually.

This solution also provides security mechanism which restricts unauthorized students from marking their attendance by proxy, while allowing only authorized teachers to take the attendance. It will have the capability to track movement into restricted/un-authorized areas in the school/college premises raising an immediate alarm for such un-authorized movements. Further, it will keep all the data at a centralized server, in a secured and readily accessible manner for post analysis. This analysis can be done in number of ways to improve the education system in schools. The team demonstrated the concept in a short duration of less than 12 hours of coding.

Expressing his delight at winning the award Mr. Manoranjan Mohapatra, CEO, Mahindra Comviva said, “We are honored to receive this prestigious award in the field of Social Innovations in India. This award is a testimony to our commitment to bring in innovative technological solutions to support social causes and help the society at large. We will continue to innovate and work closely with several schools to ensure that this solution is widely used to usher in societal transformation.”

Congratulating Mahindra Comviva on its feat Karl Mehta, Founder of Code for India and founder-CEO of EdCast said, ‘’Hackathon for Social Innovations is conceived with the aim to provide a great opportunity for young engineers to be a part of citizen participation with Government programs that work with a mission. We are pleased to see Mahindra Comviva nurture young talents to develop cutting-edge technological innovations and putting them into practice.”

The week-long Festival of Innovation conducted by Code For India that concluded on March 19, 2016 had a number of roundtable discussions relating to the role of inclusive innovations in various social sectors. The Hackathon aimed at creating a digital system that will take forward the mission of large scale changes through social innovations. The agenda and the themes of the Festival of Innovation have attempted to build inter-linkages amongst various stakeholders essential for an inclusive society based on inclusive innovations and technologies.
hackathon industry mobility security