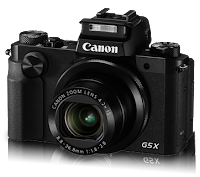 
While developed for different end users, the PowerShot G5X and G9X are designed with the ease of photographer in mind, the cameras feature new optimized button layout on the user interface. The touch screen complements the control ring around the lens for easy adjustments to camera settings such as ISO speed, aperture and focus.

The Connect Station CS100 offers an easy and convenient way to aggregate and store images and videos captured from all your imaging devices. Not only will your content be properly indexed, but you can also view it on your flat screen television, as well as share your content via Canon Image Gateway (CiG) to various social networking sites.

Mr. Andrew Koh, Vice President of Consumer Imaging and Information Center, Canon India commented, “As the leader in Digital Imaging, we strive to bring innovation and advancement to the market with every product we create. The PowerShot G5X and G9X offer class leading features and performance for discerning users. With 1.0-inch sensors, and brilliantly wide-aperture lenses, these cameras allow users to enjoy DSLR-like image quality, in a sleek and lightweight form factor. With the addition of these 2 models we have the strongest, most versatile line-up of large sensor compact cameras in the market today. Our Connect Station CS 100 is a new line of product and the ultimate for storing and sharing content captured by all your imaging devices. With the CS100 you can not only store, but view your content, as well as share it to various social networking sites”.

The PowerShot G series is associated with high image quality that approaches DSLR cameras. The large 1.0-inch sensors bestow both these cameras with outstanding image quality, and the ability to capture finer details that most small cameras miss. Additionally, these larger sensors allow for inducing background/foreground blur that is necessary for proper photographic expression. The powerful high sensitivity CMOS sensor along with proprietary DIGIC 6 image processor creates Canon’s high-sensitivity (HS) system to provide photographers with high performance point-and-shoot cameras in varied lighting conditions. Both the PowerShot G5X and PowerShot G9X are able to capture great photographs even in very low light conditions.
Heightened visibility with EVF
A first in the PowerShot G series line, the PowerShot G5X is equipped with a built-in EVF that has a high resolution of 2.36 million dots. With rich colour fidelity, photographers will find greater enjoyment focusing on image composition.
With the EVF, photographers can be confident about the final images taken as the EVF reflects exactly what is seen by the camera sensor and thus reflecting a true image representation of what the photographer sees.
The EVF was optimally designed with the eye point of 22 mm to ensure comfort even for bespectacled users. The exceptional clarity of the EVF and high speed display mode for moving subjects offers users a highly accurate preview of the final composition with minimal discrepancies in colour.
When shooting in a bright environment, the EVF gives clear visibility as it is not affected by glare. When the EVF is in operation, the perceptive system automatically disables the LCD screen. This makes it convenient for the photographer to shoot discreetly in a dark environment such as a concert hall or museums, as the EVF makes it possible to shoot confidently without the use of the LCD screen.  The PowerShot G5 X also offers the flexibility of shooting from the vari-angle touchscreen LCD for selfies, creative low or high angle shots.
Slim line PowerShot G9X for powerful imaging on the go
With a streamlined compact design and weighing approximately 209 grams, the pocket-sized yet powerful PowerShot G9 X is the lightest and most compact camera in the PowerShot G series range to date and perfect for everyday usage. Reminiscent of classic cameras with bold lines, the leather-like trim frame the sides of the camera, emphasising contrast in surface details while providing users with a firm grip when shooting.
The simplicity of its design carries over to its operability, with a control ring to complement the touch panel. Between these two elements, a user can easily control the camera settings and make adjustments quickly and efficiently.

In both the PowerShot G5X and G9X, the bulb exposure feature provides the user with greater control over shutter timings, which can be highly useful when capturing the light trails of cars, fireworks and night scenes. The new Auto ND Filter ensures that the appropriate brightness is achieved enabling the photographer to focus on capturing the moment in different situations.
Creative expressions with Advanced Movie Functions

Adept at creative avenues of expressions, the cameras are equipped with movie editing functions for richer storytelling with the ability to record 1080p Full HD videos (at 24p and up to 60p in MP4 format).

Story Highlights automatically chooses a series of photos or clips and puts them together with effects, automated editing and even background music for a lively dimension. The Short Clip Movie feature on both cameras helps photographers capture a series of 4 to 6-seconds movie snippets with different play back speeds - normal-speed, fast motion, action replay or slow motion for stylistic effects.
Sharing your pictures anytime and anywhere

The PowerShot G5X and G9X are equipped with Wi-Fi and NFC for easy sharing of photos from between compatible cameras, smart devices, Canon Connect Station CS100 and Canon iMAGE GATEWAY (CiG).

In addition, the Canon Camera Connect app allows users to remotely control camera functions such as zoom, focus, shutter speed, ISO, aperture, and aspect ratio via their smart devices. This is particularly useful for group pictures, in tight spaces where unusual angles are required or shooting nature from a safer distance.   For the first time in the PowerShot G Series line, alongside charging via the battery charger supplied, the convenience of in-camera USB charging is now also available and thus giving users more options in ensuring their cameras are always powered up.